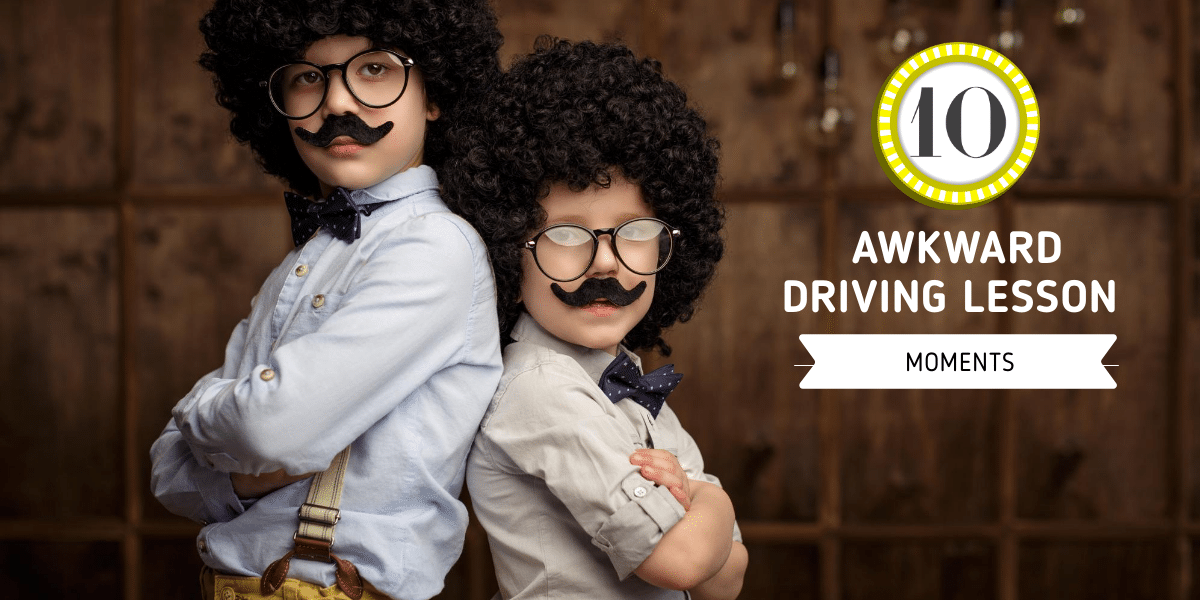 When you are learning to drive, you are bound to make some mistakes. Everybody does it, and most of the time, it’s fine. But every driving instructor has plenty of stories about serious blunders that some of their students have made.

The dynamic between a driving instructor and a student can be a little strange at first as well because you are in such a confined environment with somebody that you barely know. That means that there is a lot of potential for awkward moments during driving lessons.

These are the 10 most awkward driving lesson moments you will have to deal with.

It’s always awkward trying to hold a conversation with somebody that you don’t really know that well, but you usually have a quick escape route if you bump into them in the street. But when you are having a driving lesson, you are stuck in the car together with no way out.

After a few lessons, things will get easier once you get to know them a bit but it’s going to be awkward to begin with. Driving instructors are used to this so it’s likely that they’ll have a stock of questions that they ask to move things along a bit.

Getting The Wrong Name

This one can happen on either side, but it’s less likely that you’ll forget the driving instructors name because it’s usually written on the side of the car. The instructor, on the other hand, gives a lot of driving lessons each day and it’s likely that some of their students have similar names, which means they might get yours wrong. It’s always a little awkward to correct somebody for the first time, but it’ll be way more awkward if you let it slide and they continue calling you the wrong name for months before eventually seeing your real name on some paperwork.

Most of us don’t like to admit it, but when nobody is around, we sometimes like to have a little scratch around in our nose. We’re not like little kids with a finger buried up there, but we’d still rather that nobody else saw us. The problem is, when you are concentrating on the road, you might forget that somebody else is sitting right next to you and decide to have a dig around.

Picture the scene, you’re all tucked up in bed enjoying a relaxing Saturday morning and suddenly, the doorbell goes. So, you get up and drag yourself to the door in your pajamas, only to find your driving instructor on the other side. You’re embarrassed because they’ve seen you in your pajamas and they’re frustrated that you’re late. Next time, just set a reminder on your phone.

Not Knowing Left And Right

When you’re driving and your instructor starts giving you directions, it’s always a bit awkward if you don’t know left and right. The first few times, they might put it down to nerves, but eventually, you’ll just have to admit it and ask for help.

Driving Past Your Ex

Bumping into an ex is always awkward, but it’s so much worse if you drive past them on a driving lesson. They’re watching you, hoping that you’ll stall the car so they can laugh at you. Your driving instructor will probably notice that something is up, which makes it all the more awkward when they ask if you know each other. The best thing to do is just focus on the road and try to ignore them.

Driving Past Your Friends

Driving past your ex is bad, but driving past your friends can be even worse. They’ll all be trying to distract you and you want to make sure that you look cool in front of them, which is never going to happen. Again, the best thing to do is try to ignore them.

Everybody stalls from time to time, that’s normal. But things get awkward when you’re sitting at a junction with a long line of traffic building up behind you and you keep stalling over and over. Eventually, your driving instructor will have to take over so they can get the flow of traffic moving and you’ll be left feeling embarrassed.

Rule number one, always go to the toilet before your lesson. It’s always an awkward situation when you have to ask your driving instructor if you can stop the lesson and find somewhere to go to the toilet halfway through. It’s even more awkward if they’re the one that needs to go.

It always feels awkward when you have to tell your instructor that you have failed your test and you need more driving lessons. But you’ve got to remember that driving instructors have a lot of students, and a lot of them fail, so there’s no need to worry about it really.

You’re going to experience some of these awkward moments at some point during your driving lessons, so prepare yourself.